My Autistic Super Hero and a Crunchy Granola Recipe 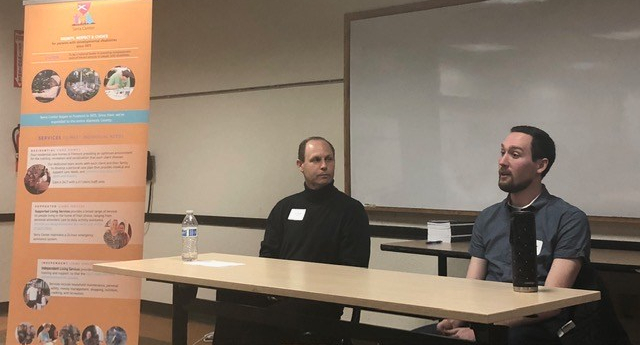 Ken and Andrew at Speaker Meeting for the Serra Center

Today I’m inspired to write about our families struggles with #Autism. Last week, my husband Ken and son Andrew spoke at the City of Fremont’s Youth and Family Services Bldg to support the Serra Center a non profit located in Union City. Ken’s cousin Leslie Mc Gary asked if they would speak to the community to bring #AutismAwareness since March is #IntellectualDisabilityMonth. 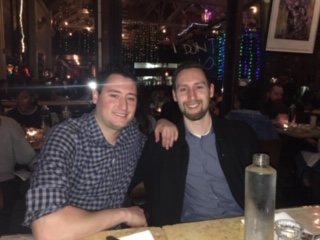 Let me start by saying that both my boys Curtis and Andrew are my everything. I’m very proud of the men they have become. This blog is about Andrew’s disability even though Curtis struggles with ADHD. They are both remarkable and have achieved a lot.

Andrew is particular has achieved unbelieveable feats in his 26 years and he’s like my super hero. He is a 4th degree Master of Taekwondo and currently teaches part time. He’s an Eagle Scout with the Boy Scouts of America which says a lot about his leadership skills. Andrew recently earned a Performing Arts Degree in music from St. Mary’s College in Moraga California, and occasionally sings as a Tenor at Swedenborgian Church in San Francisco.  But there are still struggles that get in his way on a daily basis, even though he has overcome a lot. He accepts himself and who he is and isn’t afraid to share his message about autism. He’s passionate about giving back and educating what he has learned throughout his life.

Here’s a little bit of back history to our story. When Andrew was three and a half he was diagnosed with Autism. At his check up he began swinging his socks in front of his face (called stemming). Dr. Randall Bergen his doctor suggested he might have pervasive development disorder, but because Andrew’s language was good he didn’t think so. Then two weeks later, I began to worry that Andrew had a hearing problem because he didn’t respond to my questions. It was that day that I decided to take him back to Kaiser and have him seen again. Our pediatrician referred us to a neurologist Dr. Candida Brown and to an audiologist. Dr. Brown did a variety of tests and Ken and I had to fill out  questionnaires. Andrew’s hearing was fine. He passed the test with flying colors.

We learned that Andrew barely fit the criteria for autism, his symptoms were mild and were more similar to Asperger’s but the doctor would give us the autism diagnosis so we could qualify for services. Eventually, we moved to the San Ramon Valley School District since Concord schools didn’t offer the services we needed. Andrew would need speech, since he repeated sayings over and over again (called echolalia). He would need to go to preschool that had teachers that were equipped to deal with kids on the autistic spectrum. At three and a half, he got on a little yellow bus every weekday morning to San Ramon where he attended Twin Creeks Elementary. It was so hard to see my little guy get on a bus and leave his mama. But I knew that Alyse his teacher and also a speech pathologist would help Andrew communicate better, and I got a well deserved break.

Andrew also had behavioral therapy services paid through the Regional Center which helped him with potty training and outbursts. You see, he had a difficult time transitioning from one activity to another and would have meltdowns. At four Andrew would go poop in his diaper/pants after walking up the tree in the backyard on the hill. The behaviorist taught him to go poop in the toilet, which helped tremendously. Regional Center also paid for a babysitter so Ken and I could get a night out. We were lucky that Andrew’s grandma Nilda wanted to watch him on Friday night’s and that money that we would have spent on a caregiver went into a special account for Andrew. For this we are eternally grateful because it saved our marriage.

Of course there is so much more to this story and you can access that if you want to read Ken’s book that he self published “Andrewtism- a Personal Transformation While Parenting an Autistic Child”. Ken wrote this when Andrew was fourteen, hoping to help other parents raise their kids on the spectrum. Or you could read my previous blog from a few years back.

During the talk last Tuesday Andrew sang Louie Armstrong’s “What a wonderful world” which surprised us all. He described his autism journey and how music influenced him. “He found his voice” he said and even wrote about his journey in his essay when applying to St. Mary’s College. Many of the guests that attended the meeting thanked Andrew and Ken for sharing their story. Ken spoke about how raising a son with autism changed him, but he wouldn’t have it any other way.

Andrew told stories about the bullies that he encountered, how he was mistakenly left at a swimming pool for hours unattended at the age of 8 by a neighbor, and how he survived his 1st degree black belt testing. He answered questions eloquently trying to stick to the hour allowed for the meeting.

Over the years Andrew has collected Superman memorabilia, I think because it resonates with him. He has Superman posters, coffee mugs (although he only likes hot water), slippers and more. He and his old girlfriend Mary even dressed up like Clark Kent and Lois Lane one Halloween.

Leslie continues to share the thank you emails that she has received from many of the parents who related to and were inspired by our story.

An attendee named Renee commented “I am so intrigued by that young man, and he left me with so much positivity and information to help two of my nephews who also are on the autism spectrum.”

Here’s a YouTube Video of Andrew Smyth of one of Andrew’s vocal performances at St. Mary’s College a few years ago. And here is his singing the Star Spangled Banner at his Taekwondo studio where he works.

Side note: Andrew asked his long time friend Josh who is also afflicted with autism about his thoughts about living with Autism.  Here is what Josh eloquently wrote:

“I guess, if it comes down to it, the most important thing I had to learn when dealing with being on the Spectrum is how to accept that I am still OK as person. I had to learn, and had to become confident, in that fact that I am who I am, and that if anyone should be happy with who I am, it should be myself. Autism (especially high functioning autism) is not a weakness, it is just an aspect of who I am. I am the one who decides how people define me, not my diagnosis.”
– Josh Downes

I guess I’m still trying to help Andrew in any way I can. I communicate with buisnesses like SAP on Linked In and Twitter that hire individuals with intellectual disabilities (or abilities) and I’m hoping he will get noticed. Maybe someone out there is interested in hearing us speak again. Ultimately, I know things will work out in the long run for Andrew and our family. Maybe it’s time for him to put on his super hero cape!

Thank you for reading my blog. It means the world to me. Commenting helps Google believe this is an actual legitimate site, so if you feel inclined, I would be ever so grateful.

Here is my recipe for Maple Nut Granola that my niece Keri has been asking for which you won’t want to live without. Serve with your favorite organic yogurt and berries. And if you like coffee, I wrote a blog on Kanen Coffee in Berkeley who so graciously repaired my espresso machine. 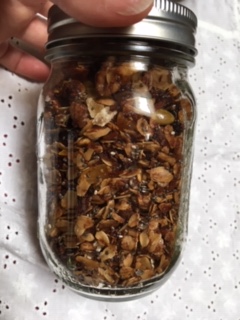 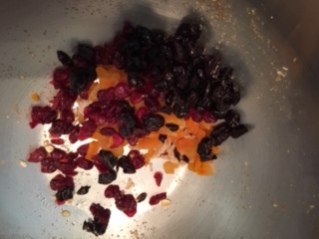 Preheat Oven to 250 degrees and place rack from oven in middle of oven. In a large mixing bowl put everything from the above list in the bowl, except dried fruit. Mix thoroughly.

Spread mixture onto two sheet pans lined with parchment paper or silpat baking mats. Bake until golden brown, stirring occasionally for about 25 minutes or more depending on your oven. Remove pans from oven and cool. Mix in dried fruit and chia seeds. Place in airtight container for 1 month or freeze. Makes  9 1/2 Cups